The results of the research published on Advanced Materials 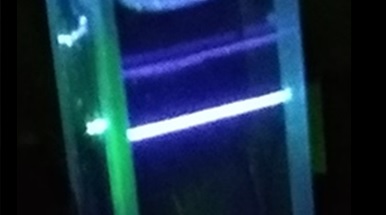 The Sun irradiate the Earth with multicolor light, where each color corresponds to a photon (the quantum of radiation) with different energy. All of them can be collected to produce electric power or activate chemical reactions, but the current photovoltaic and photocatalytic technologies cab exploit only a small fraction, which, in the best case, reaches one third of the total available photons.

In order to make these devices more efficient, for example the solar cells, it is required to exploit some processes that enable to recover the waste light. To overcome this issue, the Advanced Spectroscopy of Functional Nanomaterials team at the Department of Materials Science of the University of Milano-Bicocca, led by Professors Sergio Brovelli,  Francesco Meinardi and Angelo Monguzzi, developed a new class of fluorescent nanocrystals that incorporate few gold atoms and with surfaces decorated with organic chromophores. These nanocrystals can absorb and manage the solar spectrum, by transforming a fraction of wasted photons to be used by devices. The results of this research has been recently published on Advanced Materials (Impact factor 27.398 - 2019 Journal Impact Factor, Journal Citation Reports (Clarivate Analytics, 2019)) as communication titled "High Photon Upconversion Efficiency with Hybrid Triplet Sensitizers by Ultrafast Hole-Routing in Electronic-Doped Nanocrystals" (doi: 10.1002/adma.202002953).

Specifically, the scientists designed an high efficiency multicomponent system able to harvest the low energy wasted photons and to convert them to high energy photons that can be exploited by devices. « This transformation is called photon upconversion and it works – says Monguzzi – thanks to the interaction between two objects: an antenna, i.e. the semiconductor nanocrystal, which harvests the solar energy, and a converter/emitter, which receives the energy from the antenna an generates high energy photons».

The energy transfer from the antenna to the converter is a key step of the process. « In order to maximize its efficiency, the light-harvesting semiconductor nanocrystals have been modified introducing gold impurities as metal quantum clusters, which are able to work as energy bridge between the nanocrystal and the converted by means of ultrafast processes, in a time scale lower than one billionth of second (picoseconds), thus extremely efficient», continues Brovelli. «This mechanism designed to harvest and transport the energy across the inorganic/organic interface - says Meinardi-  is based on general concepts, which can lead to the development of new classes of hybrid materials to be exploited in other areas of photonics and optoelectronics, for example to fabricate new markers for bioimaging or new sensors, or in photochemistry».